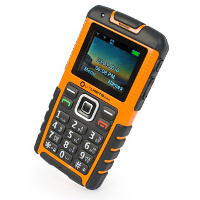 If you tend to drop your handset simply because you are naturally clumsy, then might we suggest you take a gander at the ITTM Outlimits DSS? Don’t be frightened by the uber long name that you read – it not only makes you sound cooler, it will also give you more peace of mind whenever you tote this £179.99 handset around. Why do we say that? Well, this handset is more or less impossible to destroy during everyday use, and is more than capable of taking all kinds of punishment you throw at it.
Not only is the ITTM Outlimits DSS shockproof, it is also drop-proof, dustproof and waterproof, being tough enough to withstand pressures up to 100kg, survive a fall from 2 meters and can be submerged up to a meter underwater for up to half an hour before it starts to give up the ghost. Fret not about punching the wrong numbers – it will come with large buttons that allows you hassle-free operation without being required to remove gloves, while those who want to live the handsfree lifestyle can always use Bluetooth to hook it up to a handsfree kit.
Capable of storing a couple of SIM cards, it will also feature a SOS button on the back that will immediately dial your specially-designated number during an emergency so that you can summon assistance almost immediately. Sorta like a 21st century magic lamp, no?