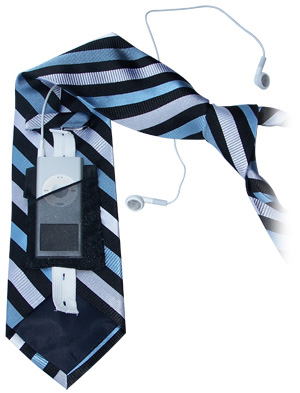 Guys are stuck wearing ties and frankly they’re a pointless accessory.  They just look uncomfortable and they just sort of hang there.  Chicks all the time have the perk of hiding small amounts of cash in their bra, but guys are stuck using boring pockets designated for that sort of thing.  Well now you can have an extra hidden pocket behind your tie.  It’s specifically made for small MP3 players like the iPod Nano, but it could be used for plenty more than that.  Hopefully an iPod wouldn’t put too much weight on your neck though.

Besides a Nano this could be used for various MP3 players, business cards, credit cards, money and smaller sized cellphones.  If you’re using it for an iPod or other MP3 player, the earphone cord could be hidden through your button up shirt and pop up at the collar of your shirt.  Making it far less visible and making it easier for you to get away with not paying attention to what’s going on around you.  There are several things a tie like this could be used for, it’s entirely up to you what you store within it.  A six pack of the pockets will cost you $34.95 and would have to be sewn onto your regular tie.  The ties will cost you anywhere from $35 on up to about $60.