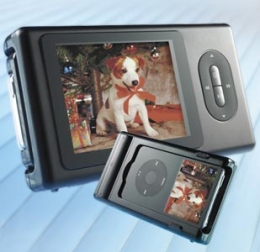 People with the 5G iPods, a.k.a. iPods with video, will scoff at this gadget, why would they possibly want a second screen for their iPod, but 4G owners might appreciate being able to watch video on their (aging) device. While the MPAA might not like the iSee 360i, I do.

With it, you can record pretty much anything you want from your cable, satellite, broadcast, VCR, camcorder, or any other analog source. All video recorded, which goes onto your iPod, can be played back on the 3.6 inch LCD. The unit integrates fairly well with your iPod, but it is black, so your pink mini might look weird in it. Besides having a much better screen than the 5G iPods (about 2x bigger), the iSee can show all recorded content onto a standard TV (640 x 480 resolution). Battery life isn’t wonderful though, although it is better than the iPod’s, but 4 hours isn’t very impressive. Out of the box, the screen fits most 4G iPods, but it also includes adapters for the mini, nano (it doesn’t specify if it’s 1G or 2G), and 30 GB 5G models.

All of this sounds pretty cool, but when you hear the price, you’ll probably just want to invest in a new iPod, maybe one of those 80 GB 5Gs, they’ve got some decent battery life and the screen isn’t that bad. The day after you pay $280 for your iSee 360i, Apple will come out with the true video iPod, which will have a much better battery life, cost the same, and be a whole lot cooler.