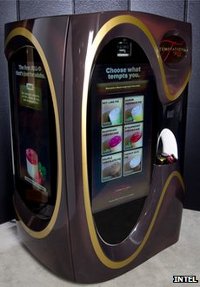 Vending machines used to be dumb machines, where all they do is spit out whatever you decide to exchange with your hard earned money. I guess things are going to change in the future, where Kraft Foods and Intel have come together with the iSample smart vending machine. Just what exactly makes this particular vending machine so smart, you ask? For starters, it is capable of capturing an image of your face, analyzing it, before coming to a computerized conclusion of your age and gender – selling you only the relevant items in the process.
Currently, the iSample sees action in delivering a new kind of dessert in customer trials. To put it in a nutshell, the iSample enables Kraft to tailor the product to the shopper, while ensuring kids are excluded from this particular adult-focused promotion.

Intel has plans to retrofit this particular technology to existing vending machines, so that companies are able to figure out just what kind of people are purchasing their products. Of course, another variable to consider would be the fact that this study would be limited only to those who like to make purchases from vending machines, what about others who like to go to stores instead?
An optical sensor will be fitted to the top of the machine, where it is capable of picking out the shape of the human face. Once detecting a human in front of it, the computer processor inside will then carry out a bunch of calculations that are based on measurements such as the distance between the eyes, nose and ears. These will then be used to determine whether one is male or female, dropping them into one of four age brackets. All these calculations will take a fraction of a second, before the iSample determines what, if any, product the shopper should be served. Ever wondered what would have happened if you put up a photo of someone else instead?
Kraft currently uses the iSample to trial Temptations – a jelly-based dessert. Marketed as “the first Jell-O that’s just for adults”, this machine will politely ask the child to step away should it detect a child instead.
Source