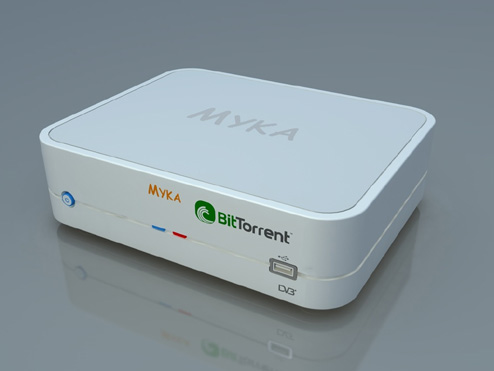 Bit Torrent has albeit completely taken over the file sharing world, particularly when it comes to movies and first run TV episodes. But users still have to reencode and burn to DVD before they can enjoy their downloads on TV. Users have longed for a killer gadget that can access a bit torrent feed and display downloads directly onto a TV for all to enjoy. Myka, may just be that killer gadget.

Users can hook up Myka directly via WiFi or LAN cable and then connect to a TV via high defintition HDMI, or even more standard def choices as Composite or S-Video. Myka comes in 80, 160 or 500 gigabytes versions, which can also be expandable via USB. Bit Torrent comes preinstalled and the box is run on pure Linux. The Myka can also be networked with a PC so that users can then transfer videos and burn them onto DVD.

Depending on hard drive size, Myka will sell for between $299 and $459. Myka brags that access to all studio films and TV shows is already available once connected to the Net, but promises that they are “in discussions with major content owners, studios and TV networks.” Which begs the question … is Myka the future of entertainment distribution or the next front in the ongoing war on video piracy?

5 thoughts on “Is Myka the future of movie distribution or of movie piracy?”