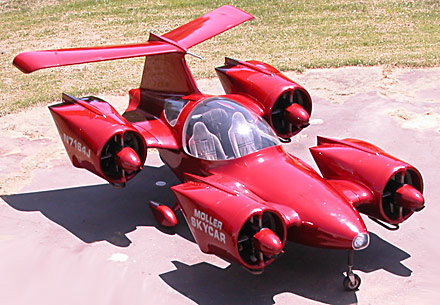 “Where are the flying cars?! They promised me flying cars!” That was the infamous lament of actor Avery Brooks in a popular IBM commercial a few years back and he has a point. Where are the flying cars? Well, we’ve seen many announcements that they’re coming with the most famous is the Moller Sky Car. Now it seems that with losing over 40 million in development costs, even Moller executives are leery about the prospects for the future of their flying car.

The handwriting for Moller has been on the wall for awhile now. With promises of production right around the corner and countless delays, it wasn’t looking good for the M400. Even with a listing in the famous Neiman-Marcus catalog – the exclusive department store of the rich and famous – the skycar with a $100,000 price tag hasn’t generated enough presale interest. After which, a major warning sign came when Moller auctioned the M400 prototype on eBay to help pay it’s mounting debts. But that failed to generated the needed 3.5 million dollar minimum bid.

Still, even though the publicly traded company posted an $80,000 loss for last quarter, that is substantially down from the nearly half million lost the previous quarter. Still, the technical hurdles the Moller M400 has to surmount are extremely daunting. The M400 relies on a computer controlled autopilot, and 8 new rotary engines which rotate for a change in axis of flight from forward to hover. The same tilt rotor development nightmare that nearly killed the V22 Osprey.

And with such a vast amount of money lost in development, executives of the flying car company now say that without a substantial infusion of cash to continue operations it’s highly unlikely the Moller M400 will ever take to the skies. Which means the closest anyone may get to it, is either reading about it in a Clive Cussler novel or seeing the prototype some day gathering dust in the Smithsonian Air & Space collection.

Video of what could’ve been can be seen here.