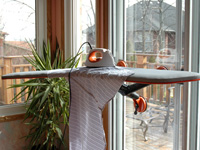 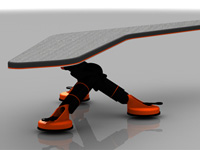 We found out about this thanks to Yanko Design, the Liika, an ironing board that can fit just about anywhere and iron from any angle.

Home Interior student Tony Zakrajsek received a 2006 Nienkamper Award for his thesis about a boomerang shaped ironing board using reticulating tripod fitted with large, pivoting suction cups. This feature not only allows it to either stand on it’s own, but can also be secured to any non porous surface. Not only does this allow for doing your ironing just about anywhere, but it also provides for flexible and comfortable height adjustment that conventional ironing boards don’t provide enough of. If you’re a tall person, you will understand what that means.

In addition, the suction arms, which rotate and pivot, offer a large range of motion allowing the Liika to conform to almost any household area, such as counter tops, windows and walls. And when not in use, it conveniently collaspes to a fraction of an inch, flush against the wall.

This makes the Liika idea for not only small apartments, but RVs, offices, and even windows. Just about any wall area that has a flat edge can be used to do the daily ironing.

The Liika was recently featured in not only the April issue of Canadian Interiors magazine, but also the popular CBC television show Dragon’s Den.

Granted, it isn’t the “gizzy,” tech we like to feature, but it is immensely practical in a hich tech sort of way.