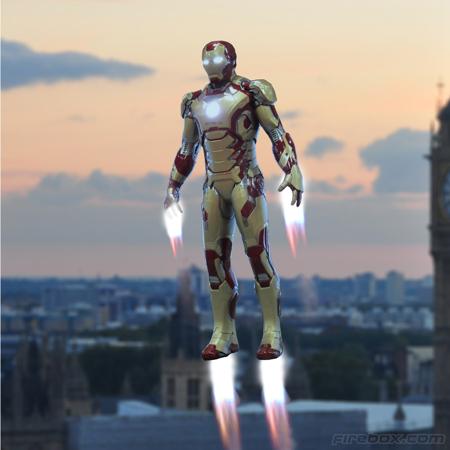 So you want to be a genius, billionaire, playboy philanthropist, but lack the looks, smarts and money to play the role? Never mind then, you can always dress up in Tony Stark’s alter ego, the mechanized Iron Man who seems to be invincible when it comes to taking in all the heavy hittin’ from enemies, regardless of which dimension that they come from. In a nutshell, this Iron Man suit might just be the only weapon you will ever need, although it still puzzles me where does Tony Stark go when he wants to relieve himself in the midst of battle. This Iron Man suit will not come cheap either, as it carries a price tag of £250,000, which is a relative bargain when you compare to what it offers. I would dare say that a full fledged Iron Man suit packs far more firepower than a couple of F-35s, and yet to cost a mere drop in the ocean compared to those futuristic jet fighters? It is a steal.

Specially crafted from a mix of steel and carbon, it will also ensure that the iconic red/gold Iron Man colors are featured for easy identification. The Mark XLVII headset utilizes projected holographic technology, while the presence of hand-mounted stabilization jets ensures that you do not simply fall out from the sky. Those will work in tandem with the thigh-mounted flare development system, helping deliver optimum flight control, while there are cameras located on the shoulders as well as wrists for improved flight-safety.

All right, so it sounds so out of this world, that there might just be a sliver of truth to it, no? Unfortunately, our dear readers, this Iron Man suit that you have just read about is as real as Tony Stark himself – both of them do not exist in our reality other than being a figment of our overactive imagination. Imagine how many of such suits would the rich of the world purchase if it were to be true!