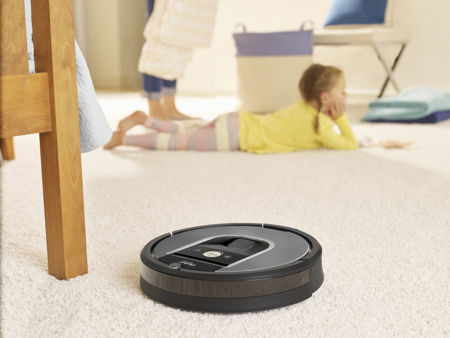 Where robotic vacuum cleaners are concerned, there is one particular name that we are all very, very familiar with — and that would be none other than iRobot. The iRobot Roomba 960 would be the latest model that is set to be announced, being the second robotic vacuum that will make up part of the 900 Series Roomba. So, what kind of goodies do you think we can expect to see from the iRobot Roomba 960?

For starters, the Roomba 960 will be able to extend mapping, adaptive navigation with visual localization and sport cloud connected app control that will definitely offer a wider range of appeal to the mass consumer market, as it delivers high-efficiency and systematic cleaning without breaking the bank — and your back, for that matter.

The iRobot Roomba 960 Vacuuming Robot is touted to be able to help keep floors cleaner throughout the entire home thanks to its new intelligent visual navigation, the iRobot HOME App control, as well as deliver 5x the air power compared to previous generation Roomba vacuum cleaners.

With the iRobot HOME App control working alongside wireless connectivity, you can be sure that you do not have to worry about being unable to have full control over the Roomba 960. Other features that are found in higher end Roomba 800 and 900 models include tangle‐free debris extractors to prevent hair tangles, Dirt Detect Series II for a focused cleaning on particularly dirty areas, and Recharge and Resume functionality which will ensure that the job will be completed — even if it means having to return to recharge halfway when you are not around.

The Roomba 960 Vacuuming Robot from iRobot is available for purchase over in the US and in Canada for $699 a pop, although it will make its way to the Far East in Japan as well as select EMEA countries some time later in the third quarter of this year.