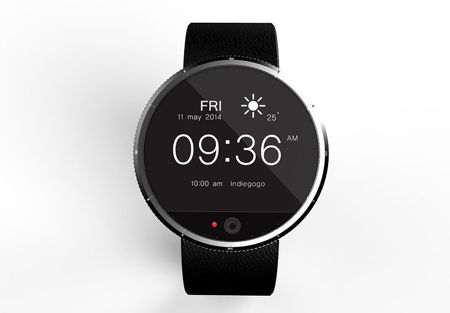 Smartwatches are dime a dozen these days, and it does not seem as though there will be any slowdown whatsoever when it comes to the industry. We have seen the likes of the beautiful Moto 360 released, but this time around there is an Indiegogo project that will deliver something different thanks to the folks of IriTech, assuming it actually takes off the ground, that is. I am referring to the FiDELYS smartwatch, where it is touted to carry a ‘perfect form factor’ for iris recognition especially in terms of user experience (UX). Why so, you ask? That is because people are so used to glancing into their watches, that’s why.

The FiDELYS smartwatch is touted to be a breakthrough for the iris recognition industry as it sports a price point as well as form factor that are unprecedented – thanks to an estimated retail price of $250, although those of you who would like to place a pre-order on Indiegogo.com, it will cost only approximately $200 thereabouts. The coming together of both biometrics and wearables will ensure that both industries are elevated to a whole new level since it finally shows the possibility of iris recognition technology arrive in a widespread manner as a consumer device. Apart from that, the smartwatch’s user interface is also special since it boasts of a rotating-clicking bezel, making this a departure from touchscreen displays that IriTech believes is not the best choice for form factors as small as a watch.

IriTech claims that its iris recognition technology on the FiDELYS is said to be able to solve a trio of major problems that our current generation faces: The Password plague, Privacy issues and Authentication issues. In fact, the patented technology that IriTech uses will ensure that only “live” irises will work – high quality images, videos, as well as non-live irises will be deemed as unrecognizable to the FiDELYS.