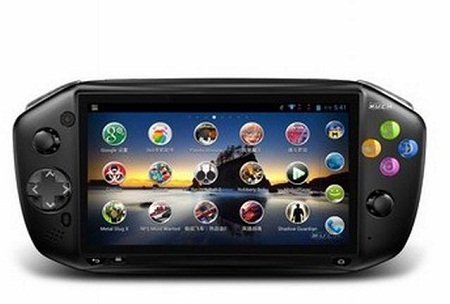 Some combinations are tried and true, such as peanut butter and jelly or Mario and Yoshi. These pairings make something that was good on its own much better. Just when you think that a product is useful or fun by itself, a different item comes out that tosses two things together, making it even bigger or better than what it was originally.

We love our smartphones, tablets, and games that keep us occupied. While there have been many phablets with gaming accessories to hit the market, the iReadyGO Much i5 Quad Core Console Phablet combines everything in one go. It has four buttons, a D-pad, and two analog sticks for gaming, and will work as a phablet as well. This has a 1.2GHz quad core processor, 1GB Ram and depending on which MicroSD card you spring for, you can get up to 32GB of external storage. It has a camera in the front and back, though as always, the back camera is much better (8 megapixels).

The screen is 5 inches, and is capable of 1280×720 resolution. This runs on Android, and supports Bluetooth, WiFi, and 3G. For those of you who don’t know where you are without looking at your device, you’ll be happy to know that this also includes GPS. This recharges through microUSB, and can be used with keyboards, flash drives, and more. Should you be interested, this will cost you around $227.

Available for purchase on dhgate, found via redferret