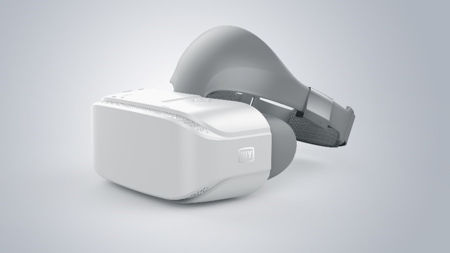 The QIYU VR II is a head mounted display (HMD) from iQIYI which recently debuted at CES earlier this month, wowing all those who took a look at it. There is one very good reason for this: the QIYU VR II happens to be the first of its kind in the world, being the only VR HMD that supports panoramic 8K (4320p, 7680 x 4320) video playback. This is an independently developed 8K Kiwi Player that can recognize VR content in different kinds of code formats, allowing it to play Ultra HD content of up to 8K in resolution.

Using such 8K video image rendering technology that is simply unique to the QIYU VR II, it will merge with the all-new upgraded 4K LCD fast-response screen in order to have it deliver a whole new Ultra HD video viewing experience in the form of a “portable and personal 8K giant screen cinema.” Viewers will not find themselves running short on video content, as it leverages on iQIYI’s TOP1 resource pool in China’s video industry. All that the user needs would be a decent Wi-Fi connection in order to gain access to more than 10,000 movies, over 20,000 programs with panoramic content, in addition to hundreds of 8K/4K videos that have been specially customized to play nice with the QIYU VR II.

With this, the user is able to enjoy the latest and most popular TV dramas such as “Nirvana in Fire 2” or “My Huckleberry Friends,” while experiencing an adrenaline rush with blockbusters from the Marvel Cinematic Universe in 8K/4K glory. The QIYU VR II has also been integrated with the iMotion position and posture tracking device, being a high-precision yet low-cost device. It will make use of armbands, allowing the traditional VR control handle to be directly upgraded from 3DOF to 6DOF. Every single bit of motion information of an arm can be captured in real-time, letting the user have a richer VR interaction experience.

There is no word on pricing yet for the QIYU VR II, but it is certainly a step in the right direction for the VR HMD industry.