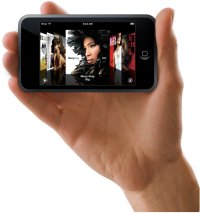 For the unknowing, Apple started shipping its new iPod Touch late last week. This is the new iPod that’s essentially the iPhone sans the phone; prices start at $300 for 8GB and go up to $400 for 16GB. While they’re usually sold out as quickly as they come in, I managed to grab one and made a nice little review, at least I hope it’s nice. I’ll be covering the design and structure of the device itself, the UI and applications, music playback, video playback, and the iTunes WiFi store (I know it’s an application, but it’s special!).

Design & Structure
Apple is known for designing products that are beautiful, and the Touch is no exception. But still, upon closer inspection, it’s easy to figure out that Apple didn’t want the Touch to look too beautiful, that’s for the iPhone. The two main things that anyone will notice is the “scratchtastic” mirror-like back and the out-of-place black piece of plastic covering the WiFi antenna. Another annoyance is the lack of any form of tactile buttons for controlling music, something the iPhone has (volume rocker, headphone controller). It’s pretty difficult, and I’m speaking from experience, to fumble through your pocket on the metro to skip to the next song. There’s just no reason for those controls not to be there because it would cost Apple what, a dollar or two tops to put them in. Still, even with those gripes, the Touch feels solid and looks great, but you’ll definitely be wanting a case. 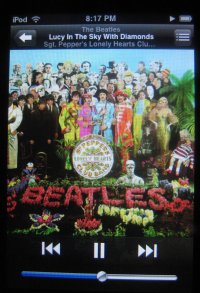 Like the iPhone, the Touch has an intuitive, touch based user interface. Navigating through the few built in applications is easy and, I hate to say it, kinda fun as well.

On to the apps that come with your Touch. There are dedicated buttons on the bottom of the screen for your music, videos, photos, and the iTunes WiFi store. Navigating your music is a breeze, either by scrolling through a list of artists/songs/genres etc or by using Cover Flow (which is much snappier than on the new Nanos and Classics). The actual “now playing” screen looks awesome if you have cover art, otherwise it looks a little bare. My only gripe in this area of the Touch is how hard it is to adjust the position of the song; because of how tiny the bar is, it’s very difficult to get it just where you want it and very easy to skip to either the beginning or end.

Videos are equally easy to navigate. They’re simply organized by movies, TV shows, and music videos. Playing a video looks great, except for one thing, the blacks look extremely so-so, a problem many users are reporting. 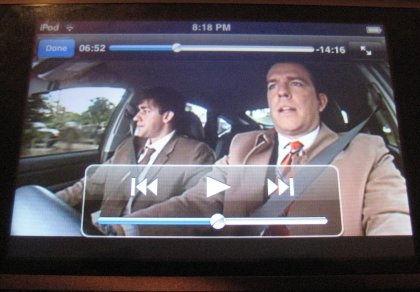 Photos, organized by albums synced from your computer, look great on the Touch, and yes, you can pinch to zoom! It’s also easy, as in one button easy, to have an automated slideshow with transitions and music form your library created. 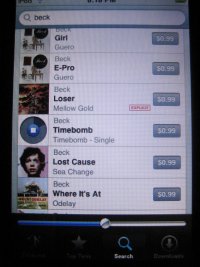 Now, this is my favorite new feature of the Touch, you can buy songs (no videos! :() from the iTunes Store over any WiFi connection. In a year’s time, you’ll be able to use Starbuck’s in-store WiFi to browse the WiFi store and make purchases; unfortunately that’s all you can do, so if you want to check your mail, you’re still going to have to pay for it. Can’t say I’m too excited about that. From the store app, you can select to view featured artists and tunes, the top tens for various genres, and, the most powerful option, a search box where you can enter in an artist, song name, album, etc. A nice touch (heh, get it?) is that the app will try to autocomplete your search for you. Once you find something you like, just tap it to load the standard 30 second preview from within your window and then tap “Buy” to have it quickly download to your Touch after you enter in your password. In a surprising move, Apple choses not to completely screw you over when you use the WiFi store because, the next time you sync your Touch, your purchased songs are copied right over to your computer in a special playlist called “Purchased on Name’s iPod”. You won’t have to re-buy those songs you already bought at the standard price. I know, that sounds crazy, but there are people out there. . .

That covers the real core applications of the Touch. You also have Safari, YouTube, Calendar, Contacts, Clock, Calculator, and Settings. All of these, except the calendar where you can’t add appointments, work well, especially for a mobile device. Notably absent from the Touch is the Mail app, something I really think would be helpful to have. Going to Gmail through Safari is easy enough, but having a dedicated application makes it much easier. And really, since the Touch is based off the same OS as the iPhone, it seems like Apple just didn’t feel like giving you your money’s worth for this product. How hard is it to copy the Mail app to the Touch? One might venture a guess: not hard at all. Come on Apple.

Overall. . .
Being an Apple fanboy, I expected to give this thing a glowing review, but it has plenty of flaws that I can’t even convince myself are small. I tried to be as objective as possible with the following list:
Pros

If you’re interested in my recommendation, I would say this: if you want it now, and don’t mind that it’s just an iPod with so-so storage, go for it. But, if you can, wait for the second generation. By then, you’ll get more storage and hopefully a higher quality device, both physically and in regard to the included applications.