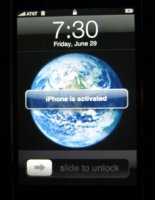 The iPhone is out! Already saturated with the reports and interviews and pictures, I really think I should share some of the hype and some of the rants with everyone.

I won’t flame, I won’t let my personal opinions shine too much trough the text, but I’ll try to be as explicit and as impartial as possible.

Apple’s remarkable marketing machine kept on ‘leaking’ hype, rumors and details until the very last seconds. The advertising part – as with all their products – worked like a dream. People have been queuing and debating and sweating for days, waiting for their ‘Jesusphone’.

The queues themselves have become real shows, with press and promotions and everything. Read on for a brief compilation of what happened and what has been unveiled.

At 18:00 local times, each store opened, just to be flooded with tired but happy looking people. In Valley Fair, the first in line was Steve Wozniak! Shortly after, the first people carrying the little phone boxes began leaving the stores; of course the press was all over them.

Sadly, nobody could truly enjoy their device prior to activating it, so the look and feel of the new device was all that buyers could enjoy. However, everyone had huge grins on their faces. I’ve never seen as many people be so happy about spending that much money, especially for a phone.

Shortly after, people and companies alike got home with the new toy and started analyzing it in every possible way. They photographed it (engadget), touched it, tore it apart(iFixit, very detailed), wanted to see how rough it is.

Conclusions?.. Well the device has bad sides and good sides. There’s no soul or revolutionary technology inside, just regular phone parts (not even smartphone-oriented parts)

The list would continue, but I’d be accused of senseless flaming by the cohorts of fanboys.

A conclusion:
The iPhone is a very sleek, fast and beautiful phone. Sadly, it’s limited to very, very basic functions, though they’re gorgeously dressed. Apple’s marketing division did everything for it, and many people are acknowledging it as a smartphone.
It definitely is a revolution in how you interact with a phone. I’m very glad about it, as it will stimulate other manufacturers for the better.

It’s not perfect. As a matter of fact, it’s far off. But let’s not forget: it’s a first-gen Apple product, and they will definitely improve over time. I’m really eager to find out about the iPhone2.0 or about the European version.

Of course, Apple wouldn’t be Apple without rumors. Here’s a roundup of the most important rumors floating around:

Official site. It can even be ordered here if you’re interested and haven’t been waiting in line.

I’ll follow up with rants and kudos as they’re unveiled.