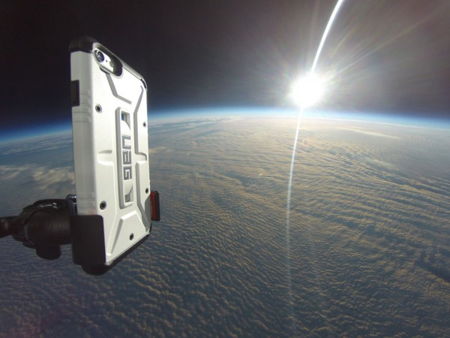 Just how tough do you think your smartphone is? Not very actually, as opposed to the regular handsets that hail from the older generation of Nokia phones. Dumb phones, such as the classic Nokia 3310, that is. These days, handsets might come with fancy names such as Gorilla Glass (well into its third iteration now, might I add), and yet when they fall down onto the floor, the dreaded crack (or cracks) will appear, sometimes unexpectedly, too, as the fall seemed to be such a gentle one, and it is not as though your smartphone had not experienced something like that before as it slipped from your hand. Well, this is why protective cases for modern day smartphones are so important – and the name Urban Armor Gear might ring a bell with you once you are done with this story.

Basically, Urban Armor Gear has managed to send an iPhone 6 on the ultimate adventure – which is, to space, or to the stratosphere if you would prefer to look at it from that angle through the help of a weather balloon. The entire flight took three hours and 45 minutes, and on its journey, it achieved a height of over 101,000 feet, having to encounter temperatures that are as frigid as -79° F/-61° C and winds as strong as 70 MPH. On its way down, the iPhone 6 had to withstand a 150-RPM rotation speed as the parachute deployed, while the flight rig did take its time to stabilize.

Upon landing, the flight rig broke apart, but wonder of wonders – the iPhone 6 emerged from the experience unscathed – being fully functional to boot. Imagine that, falling down all the way from space, and rising up from the dust with nary a malfunction or crack on the display. This is made possible thanks to Urban Armor Gear’s White Composite Case that kept the smartphone protected throughout its entire journey. It is made from a hard armor shell and a soft rubber core and bumpers, where this rugged one-piece design shielded the iPhone 6 from bumps, impacts and scratches.