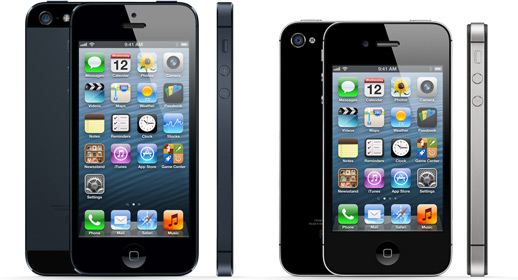 After much speculation, many rumors and even ‘leaked photos’ the next generation iPhone was revealed by Apple SVP of Global Marketing Phil Schiller today. Many anticipated features did make it into the unit and Apple – as usual – surprised the public with other perks. Widely anticipated to be the single largest product launch in history industry experts anticipate 5M to 5.5M units to be initially sold with 8M or more expected in Q4. Let’s look at why.
After two generations of no form factor change, Apple went big on change. The iPhone 5 is the Worlds thinnest smart phone and 20% lighter (than the 4S) at 112g. The 5 features a 4” screen, versus the 3.5” of previous generations. Screensize always presented a competitive challenge, but the increase should diminish that criticism. And they will be using Sharp’s IGZO display technology – thinner screens due to smaller transistors which means more light can pass through and fewer LEDs are required. Translation: takes up less space and uses less power.The screen itself uses in-cell display technology. Previous versions required 2 discreet layers for the touch sensor technology. In-cell enables the touch sensor to be included in the LCD display turning 2 layers into 1 and making the phone .5mm thinner.
The change in screensize and thickness means the unit has a sleeker look to it, differing significantly from its predecessors. And the increased screen size plus higher resolution (1136×640) LCD means enhanced detail for all.
The guts of the unit hold some changes as well. The A6 chip will speed up the unit with a 2X faster CPU and 2x faster graphics.Means Faster app launching, saving images, load music app, viewing attachments in keynotes, ~2x performance across board. Demonstration of Real Racing: to produce a feature of time-shifted multiplayer. Can challenge someone one day and race them the next day.
The camera is now 8mp sensor, 3264×2448 backside illuminated, dynamic low light mode, sapphire lense cover – protection and clearer images. Now 40% faster on photo capture. Panorama: showed 28mp panorama taken on the camera (this can be done on the fly without using third party apps like Photosynth). Software compensates for moving artifacts if youre moving. Images can be shared directly onto Facebook or using iCloud where you can share with friends when added to stream you create (they receive a push notification when new photos are added).
Network speeds have also been increased. Technologies now include GPRS, EDGE, EV-DO, HSPA, and added HSPA+, DC-HSDPA, and LTE. Wi-Fi has also been improved to support 802.11 a/b/g/n, 802.11n is 2.4GHz and dual channel 5GHz, up to 150 Mbps.
Wideband audio. In typical cell phone call, the frequency of data in your voice is compressed around the midrange. But doesn’t sounded entirely natural. Wideband audio fills up more of the frequency spectrum to make your voice sound even more natural. Just starting this technology, 20 carriers at launch supporting this. (Deutsche Telekom and Orange mentioned.)
As expected there is a new connector, AKA Lightening. All digital 8-signal design, 8-0 % smaller. Apple are working with partners to help them integrate connector into existing accessories.
Announced in June, iOS6 running on the iPhone 5, contains both Passbook and Apple’s own map application. Passbook serves as Apple’s solution to a ‘wallet’. Select coupons and vendor payment processes will be available to users via their phone. So as you arrive to Target, for example, your phone uses location services to determine where you are and if you hold any gift cards or coupons. Then you receive an on screen notification. Airlines are currently using it for boarding passes too. And select retailers even provide the ability to pay through Passbook. As widely reported Apple opted to not continue with Google maps app. This new launch will give us a glimpse at the Apple Map functionality.
There’s much more: Facebook integration throughout the OS, great enhancements to Phone app like automated SMS or iMessage back when you can’t answer the phone, FaceTime works over cellular data network. Great enhancements for accessibility, including Single App Mode. Only 10 of the more than 200 new features in iOS 6.
Prices (on a 2 year contract ) will be the same as the 4Sm 16GB $199, 32GB $299 and $399 for the 64GB. You will be able to preorder on September 14th and it will be shipped on September 21st.
So, was it worth the wait and massive hype and would you be willing to switch?
Sources: Apple, The Verge and MacWorld.