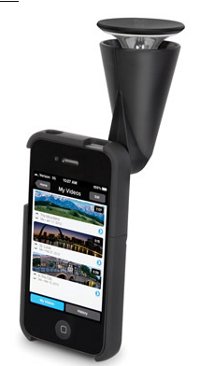 When it comes to the iPhone’s camera, it has long reigned as the undisputed champion of cameras found in smartphones, although new challengers such as the Galaxy S3 as well as the slightly older HTC One series are worth their salt as well, especially with the latter being able to capture stills while you are recording a video simultaneously. Well, what are some of the ways where you are able to extend the functionality of an iPhone camera? Why, throwing in its fair share of accessories, that’s what! With the iPhone 360 Degree Panoramic Video Lens, it pretty much says it all.

You will soon be able to shoot some great looking panoramic 360 shots and videos, thanks to a similar technology that is found in U.S. Army surveillance cameras. This particular lens relies on a curved mirror which is capable of gathering light from all directions, where it will reflect it back into the iPhone’s camera so that video recording in all directions can happen simultaneously without the need for processor intensive image stitching afterwards. Each purchase comes with a free app that will automatically calibrate the focus, adjust the exposure, and enable you to pan and tilt the viewing perspective up to 360º on the horizontal plane and up to 80º on the vertical plane. I expect to see more creative shots on your Facebook account after getting this!