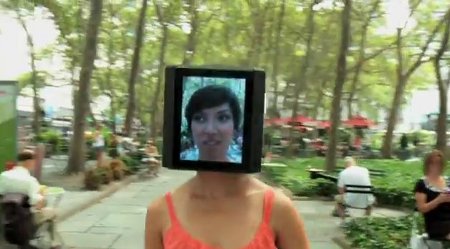 There’s an app for that – and in the case of the iPad (or iPad 2, it is your call), surely this must be one of the zanier ways to promote or advertise an app. The iPad Head Girl as she is called, is actually an advertising campaign by viral marketing company Thinkmodo, as they decided to come up with this unique looking piece of headgear which looks really realistic, sporting a girl covering her head with four iPads standing in a vertical manner. This ad intends to promote the launch of what used to be a girly magazine – but it has been injected with plenty of testosterone, calling it Cosmo for Guys.
Since many guys love gadgets, it makes sense that Cosmo for Guys is an iPad exclusive magazine courtesy of Hearst – no newsstand copies for you to look out for! Definitely one of the more interesting advertisements that we have come across to date, not to mention creative in its very own way. Watch a video of the iPad Head Girl in action after the jump.
Source