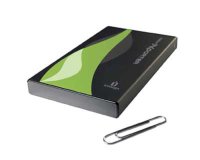 Iomega Corporation isn’t just about office devices only, as the company has recently rolled out the Iomega Media Xporter Drive which targets console gamers. This game-oriented portable hard drive offers cross-platform media storage for both the Xbox 360 and PlayStation 3 consoles, making it a snap to use both popular game consoles of today, along with the capability of hooking up to high definition televisions and other large screen TVs to share photos, videos, and music collections with family and friends.

The wallet-sized USB-powered 160GB Media Xporter Drive utilizes the USB 2.0 ports on the Xbox 360 or the PlayStation 3 to give gaming enthusiasts a convenient new way to enjoy music, digital movies, and photos through the family game console, without the need of a PC or digital media adapter. The new Iomega Media Xporter Drive has been tested for compatibility with the Xbox 360 and the PlayStation 3 and like other Iomega products is a complete storage solution that includes value-added software for converting file formats not natively supported by the game consoles.

Since both the Xbox 360 and PlayStation 3 consoles feature HDMI support as well as HDTV resolutions of up to 1080p, one can be assured that the photos and videos stored on the Iomega Media Xporter Drive will look stunning on today’s more advanced HDTVs, featuring unprecedented sharpness as well as clarity. Of course, it needs not be said that having a photographer with a keen eye for detail helps a whole lot either. According to Ralf San Jose, global product manager for HDD Products, Iomega Corporation”The new Iomega Media Xporter Drive extends the value of today’s most popular game consoles that are already evolving into home entertainment centers. For the home-gamer enthusiast, the Media Xporter Drive provides an easy-to-use portal for 160GB of family photos, music files and videos to move beyond the computer room and into the family room for the enjoyment of everyone.”