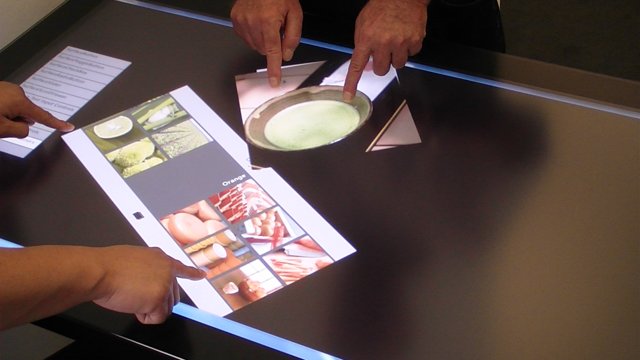 In addition to the Roku 2, we have another 2 product with the Evoluce TWO. You may have heard of Evoluce before, as this German display company makes multi-touch and gesture displays very similar to the Microsoft Surface.
The Evoluce TWO features a 46-inch multi-touch LCD display that can detect over 60 simultaneous inputs, which is good for 4 users at once.
You can watch a video of it after the jump, with the scratch-resistant front glass for a haptic touch feeling for smooth interaction. Yes, this is like the Microsoft Surface, and it has a Microsoft Kinect sensor to make it work. The Kinect has a 3D sensor mounted 100 centimeters above the screen, and it can detect shapes or 3D objects on the screen.
Yeah, it is a pretty impressive device, and as someone who has tried out the Surface before, I can tell you that I want nothing more than to have something like this as my coffee table.
In all honesty, I think that this is exactly where we are headed. Who wouldn’t want something like this to sort out photos, not to mention anything else that we usually do on laptops while watching television.
Yeah, someone really needs to make these things cheaper so they can be in everyone’s house instead of at offices retail outlets. I suppose that if I had $7,105 in spare cash, I could get one of these. Note the use of the word “if”.