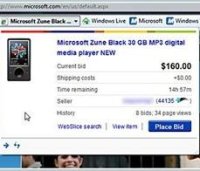 Browser was have been pretty interesting in the past, and for those of us who thought that Netscape would be invincible for all time to come, we were sorely mistaken, and that came about as Microsoft’s Internet Explorer (IE) displaced Netscape as the numero uno Web browser on computers. Of course, Microsoft’s IE has then gone on to dominate the desktop browser segment for years, but with the advent of open source browsers like Firefox, IE’s market share has started to slide, and it shows no signs of stopping. Sure, Microsoft is still well poised with the largest percentage of users, but having its share being nipped away slowly but surely with time is a worrying sign, and the executives at the Redmond, Washington facility have surely taken notice of that. Hence ladies and gentlemen, we have the announcement that Internet Explorer 8 Release Candidate is available now for your testing.

Platform Complete
The technical community should expect the final IE8 release to behave as the Release Candidate does. The IE8 product is effectively complete and done. We’ll post separately about the thousands of additional test cases we’re contributing to the W3C. We’ve listened very carefully to feedback from the betas. With the Release Candidate, we’re listening carefully for critical issues.

Reliability, Performance, and Compatibility improvements
We’ve studied the telemetry feedback about the browser’s underlying quality and addressed many issues.

Security
We’ve worked closely with people in the security community to enable consumer-ready clickjacking protection. Sites can now protect themselves and their users from clickjacking attacks “out of the box,” without impacting compatibility or requiring browser add-ons. We also made some changes to InPrivate based on feedback from customers and partners.

Basically, IE8’s main focus is on how folks really use the web, and it aims to cater for those needs. Basically, IE8 RC is more or less the finished product, and initial reviews of it show that it has done some much needed catching up compared to IE7, but it is still not on par with the latest version of Firefox. What do you think?