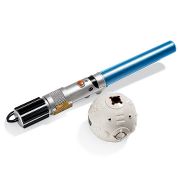 I think this would be cool even if I wasn’t a Star Wars fan.

This game plugs into a television and translates actual movement into on-screen interactive lightsaber dueling from the iconic Star Wars movies. A spheroidal training droid plugs into your TV (not included) via an included RCA cable and wirelessly detects every movement of the lightsaber as you collaborate with on-screen representations of famous Jedi Knights such as Obi-Wan Kenobi, Qui-Gon Jinn, and Yoda to battle a host of adversaries including Jango Fett, Emperor Palpatine, and Darth Vader. At 15″ long, the lightsabers hilt is wide enough for two hands, but short enough for exuberant indoor play.

Was the spheroidal training droid only in the original, or was it also in the latest films. Anyway it would be a cool addition to any living room. If you fancy starting your Jedi training it’s available from Hammacher for $59.95. Thanks to clvezlysfor the nod.