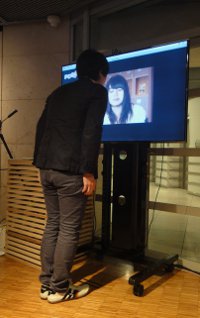 I am quite sure that those who have just entered puberty, hormones raging and all, would definitely have had a crush on one of their favorite movie or pop stars before. Actresses, models, it does not matter – surely someone must have sent you head into a spin some time or another! When movie posters were all the rage, you could see Tom Cruise or Brad Pitt as pin ups, while the boys have their favorites, too, such as Alicia Silverstone and Uma Thurman. Well, some even go so far as to give their idols a smooch on the lips – meeting not flesh and blood, but paper that gets mustier as time passes by.
Now, if only such posters could respond in kind – I am quite sure that some of us have asked that question before. Well, it seems that this particular wish has finally come through – a research group over at Keio University have managed to work on an interactive poster that is capable of reacting when kissed.

What you see above is the obvious example, where a guy, who obviously has fallen head over heels with the female lead on the screen, decided to drop all pretenses and walk up to a flat screen display, giving her a smooch – too bad those puckering lips with blood flowing through them will meet with cold hardware instead of a pair of warm lips. Well, this particular interactive poster comes with a built-in proximity sensor, so that whenever a person comes closer to it, the digital avatar will be aware and start puckering up, further increasing the “temperature” of the situation.
According to the research team, “This system is very simple. There’s an ultrasound sensor here, to detect how far away your head is. As you approach the sensor, the picture changes. When you get closer, the picture becomes a kissing face, and when you move away, it becomes a blushing face. The current system only produces visual changes, but we could also include the scent of shampoo from the person’s hair, or a lemon-flavored film on the lips, or a speaker that whispers “I love you.” People who’ve tried this system advised us to do those things, so we think there’s still plenty to be done. We’ve learned a lot from talking to users.” Hopefully the iPad application for this will be realized soon – you will then be able to see folks walking around and smooching on their favorite tablet.
Source