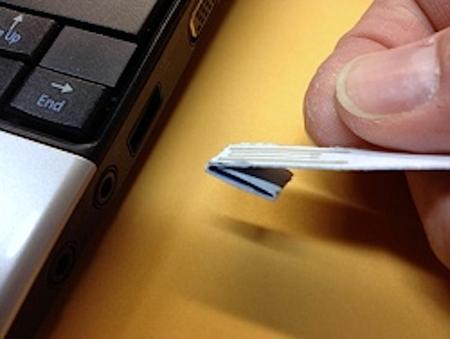 I am quite sure that many of us already own plenty of USB flash drives – not through purchasing them at a shop or something, but because we have attended enough press conferences, conventions and events for exhibitors to hand these out like candy on Halloween. The thing is, we tend to forget just what we store on all of these USB flash drives, and after a while accumulating them takes up space that all we want to do is throw them away. Which leads us to another problem – disposing of USB flash drives in an environmentally friendly manner is rather difficult, which is what led to some folks to think of the Intellipaper USB flash drive.
Basically, the Intellipaper USB flash drive is extremely tiny – far smaller than the stock USB flash drive you see at conventions, and it has another good point about it – since it is as thin as a sheet of card stock, it is also foldable. The good news does not stop there though, as you are able to mail it cheaply as part of a postcard, now how about that? After all, since majority of the drive consists mostly of paper, they can also be binned into the recycling segment instead of being thrown out away like any other regular trash.
The Intellipaper USB flash drive is now an Indiegogo project, where they are aiming to raise up at least $300,000 in order to secure enough funds to deliver its eponymous USB flash drive to the masses. According to company spokesperson Mark Baker, the company has ambition that these tiny drives will be the next Post-it note, and the total cost of it would not be more than that of a rewriteable CD – which means it would be under a dollar each. How does that sound to you for your regular USB flash drive? It would catch fire all too easily though, I’m afraid.
Source