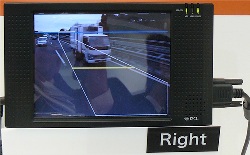 The other day, I was driving down the road, and I changed lanes. I thought I was far enough away from the other vehicles, but then I heard a loud honk. I quickly realized that the car was a lot closer than I thought it was. Considering that a lot of mirrors have that “objects in mirror are closer than they appear” warning, it makes it too easy to miscalculate the distance of a vehicle in the side view mirrors.

Perhaps this is why Toshiba invented Visconti technology, which allows drivers to see how close other vehicles actually are. The company put this technology on display at the 2008 Automotive Engineering Exposition in Yokohama, Japan. Apparently, Honda is already using this Intelligent Night Vision System on some of their models.

Instead of side mirrors, a vehicle with the Intelligent Night Vision System would have video cameras that beam a live video feed to LCD monitors inside of the vehicle. The Visconti software then calculates the distance to the cars in the other lanes around you.

There is even an indicator that displays a red, yellow, or green display to show how close (red) or far away (green) that you are. You’ve got to like that.

Maybe there will come a day when we see this Intelligent Night Vision System on every car. Something tells me the system is probably quite costly, but perhaps as the technology gets cheaper, maybe it will be a standard feature on all vehicles.