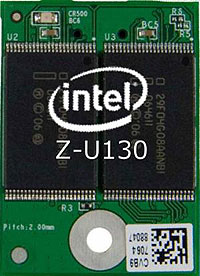 Intel is taking its entry into the solid state drive market pretty seriously by announcing the Intel Z-U130. This new line of drives will be based on NAND flash memory and work with current USB 2.0/1.1 interfaces. As any self-respecting geek would know, the advantages of a solid state drive includes superior boot times, embedded code storage, rapid data access, and being more energy efficient overall. Intel hopes that the Z-U130 will usher in an era of reliability since solid state drives do not contain any moving parts, hence being the preferred choice for storing data over traditional hard drives. Unfortunately, we won’t see hard drives being phased out of notebooks and desktops anytime soon since they still enjoy the sizeable cost advantage at large capacities. This situation doesn’t look likely to change anytime soon, so if you’re looking to purchase a notebook, go ahead without any fear of its storage medium turning obsolete overnight.

Interested parties will be pleased to know that the Z-U130 comes in 1GB, 2GB, 4GB, and 8GB capacities. 1GB and 2GB models are already in production, while the 4GB version will join the crowd next month. Those who are holding out for the 8GB model will just have to wait until December rolls around. As with all data storage devices, people will naturally be drawn to the performance numbers of the Z-U130, and I’m glad to say it does not disappoint. All models feature read speeds of 28MB/s and write speeds of 20MB/s. Interesting times are definitely ahead for everyone with more companies introducing solid state drives, but at the meantime nothing beats the hard drive when it comes to cost efficiency of a hard drive.