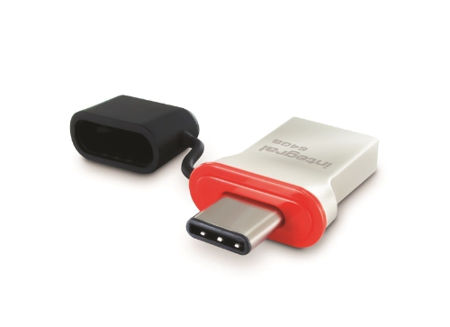 At the end of April, we did talk about how Patriot introduced a new kind of USB flash drive – while it maintains the basic characteristic of storing data on it, that particular model had something extra which the entire industry is slowly but surely moving toward – that is, to be able to connect into a future generation USB without having to worry about which direction you are going to plug it into. Yes sir, it looks like Integral Memory themselves have already jumped aboard the USB Type-C connector bandwagon by including it into their latest USB flash drive model that is simply known as Fusion. How apt!

With the Fusion USB Type-C Flash Drive, users will end up with an instant data storage device that will boast of ultimate compatibility between smartphones, tablets, PCs and Macs. In the future, the Type-C connector will make short work of all other formats out there into a single, universal interface that will be able to carry not only data, but power as well, between devices at higher speeds.

This particular new flash drive range will boast of a ‘USB Type-C’ connector; which happens to be the very first reversible USB interface that ensures that there is a ‘no wrong way round’ fit, when attaching to a device. This is an attribute that has more or less gained the approval of just about every single user of USB out there, and just to make sure that there are no worries for one to sweat it out over incompatibility issues, rest assured that the Fusion USB Type-C also comes with a handy dual interface; where the USB Type-A connector will work with all existing 2.0 and 3.0 ports that see action in millions of devices, accompanied by the new future-proof USB Type-C connector that will pave the way for a seamless transition between existing and future hardware.

One will be able to enjoy up to 64GB of storage space on the Integral Fusion USB Type-C range, where prices are touted to be comparable to existing USB flash drives as it hits the market this Q3.