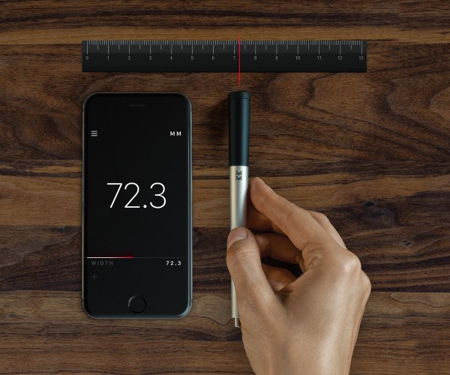 At first glance without trying to know just what a dimensioning instrument is all about, some of us might think that this could be one of the ancient relics that Dr. Strange would use, crossing into different kinds of dimensions and opening up portals between worlds. Or perhaps the herald of Galactus might have a use for this as he searches for new worlds to be devoured by his master. Actually, those are but grandiose thoughts. The 01 by InstruMMents is actually the first dimensioning instrument in the world, where you will be able to have it roll over straight, curved or contoured objects in order to have it intuitively capture, log, and share dimensions. Arriving in an elegant aluminum form factor, the 01 does more than get a grip of the dimensions around it — it will also sport the functionality of a pen, pencil or stylus, and has the ability to hook up to smartphones sans wires.

Mladen Barbaric, the founder and CEO of the company behind the 01, said, “There is a dire need to rethink how we capture and use dimensions. Measuring tape, for example, hasn’t really changed since its creation in 1860.” The InstruMMents team decided to tackle this issue with the 01, and they look to have met with great success.

The InstruMMents 01 will make use of a proprietary multi-sensor system, where it requires but a single hand to dimension. This makes it the first device of its kind all around the world that will work on 3D surfaces. You can use it to design buildings, fit clothes or hang pictures, as weekend decorators are able to intuitively capture linear or contoured lengths. Even better yet — it will last a whole lot longer than your smartphone, as the batteries can last up to half a year of use. This is definitely far more than a regular ruler as you can have it convert between metric and imperial dynamically for the recorded measurements, while scaling dimension drawings or maps to your preference. Width, height and depth are captured automatically, and the $149 asking price makes the 01 sound like a relative bargain for its versatility.