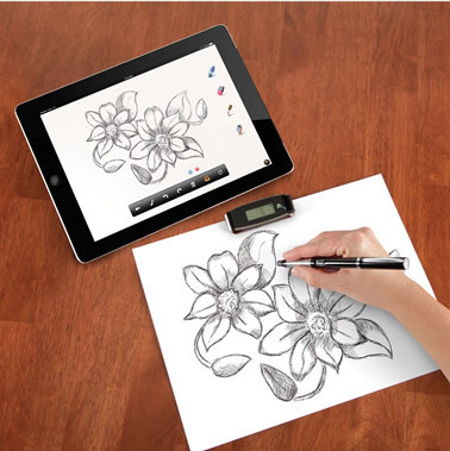 How was your life like before there were tablets for you to play around, as well as to jot notes with? Granted, a tablet offers a whole lot more options, but you cannot fold a paperplane with it. Well, there are times when we need to take down notes and would like to transfer them over to a digital format – this would more often than not mean typing down what you have written earlier on, which more or less defeats the purpose. What if there was a way to preserve both the original hardcopy and a digitized version in one fell swoop? This is what the $169.95 Instant Transmitting Paper To iPad Pen is all about. Do bear in mind that this is not the first of such devices in the market, as we have seen a variant of the iPad Pen in the past.

The Instant Transmitting Paper To iPad Pen happens to be a pen which will digitize handwriting so that it can instantly transmit notes that were written on paper over to an iPad. It will merge the ease of handwriting alongside the convenience of electronic backup, editing and emailing – all without having to go through the tedious steps of retyping as well as scanning. Thanks to the comfortable stylus, it will write like a familiar ballpoint pen, although do not expect it to be some sort of Mont Blanc equivalent. It will pair up with a small 3” receiver that has been clipped at the top of any piece of paper, where the Bluetooth devices will transmit handwritten notes or drawings directly to a tablet or smartphone. The receiver can store up to 100 pages of content at any one go, where it is compatible with the iPad, iPad Air, iPad Mini, and iPhone 6, 5/5s/iTouch 5c, or 4/4s.