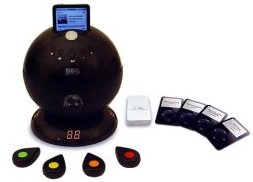 Considering how much the iPod has changed our lives, isn’t it about time a game was designed around it. Kind of like that Channel surfing game where you have to find something on the remote in order to win.

Such is the concept behind the iNo Interactive Game. The game is played as players alternate putting their iPods in the iNo, and then it randomly selects a tune to play. I think it has some speakers on it for that purpose.

After that, the players chime in with one of the four wireless remotes, and then guess the song it plays. Personally, I think the guy who has the iPod in the iNo has an unfair advantage.

I suppose this game will be quite a hit at parties. Unfortunately, I’ve heard that it only takes 30 to 80 GB iPods, which means that you might be out of luck if you have a nano.

Hey, I’ve got a great idea for how to win this game. Try filling up your iPod with some completely random tunes from independent bands off MySpace who offer free downloads. Hey, guess this one: That’s right, it’s Quando by the Three Smackers Band. If there is a band out there with that name, I’m sorry. Still, I think you see my point.

Anyway, if you’d like try it out, it’s available at the Target website for $79.95. Or you could just by an iPod Shuffle for the same price and play the same game.