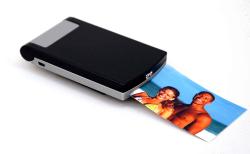 Sometime ago we already covered an innovative printer from Toshiba that could write on the same sheet of paper over and over again (read here). This new inkless printer will follow the same principle, using plastic paper with thermal properties that react to different temperatures. The novelty is that the printer is really small and it will possibly be integrated into mobile phones and digital cameras.

The product was develop by a company called Zink, a spon-off of Polaroid. It was featured on New Scientist Tech magazine, and here is a description of the printing process: “To bring out the correct colour at each pixel, the temperature and exposure to the heater element is precisely controlled. The crystals in the top yellow layer require the highest temperature and shortest time to melt and become coloured; the magenta middle layer a lower temperature and longer time; and the bottom cyan layer the lowest temperatures and longest exposure time.”

The beauty of this new technology is that the printed images, apart from having a good quality, will also be more resistant and water proof. The producer confirmed that some products might enter the market already by the end of 2007. Among the initial launches there will be a pocket-size printer that can be connected to mobile phones and digital cameras, and it should cost around $200.