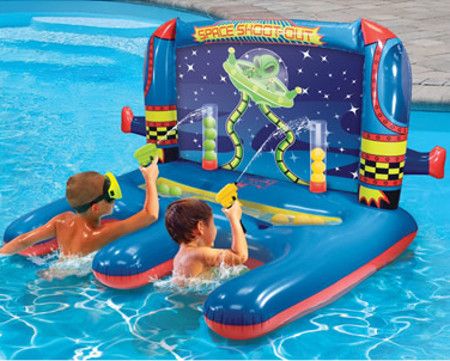 Kids absolutely love playing, as their imagination is able to run wild even with something as simple as a cardboard box that can be transformed to become a castle, spaceship, or racecar. After all, they learn a whole lot through playing outside all day. While many kids have grown up on a steady diet of video games in this day and age, how about taking a different step this time around with the $59.95 Inflatable Water Shooting Float? Having your kids play in the pool all day beats them running around in possibly dangerous areas of the city and even though it’s easy to GPS track your kids today, having them in your backyard is more comfortable.

The Inflatable Water Shooting Float happens to be a floating carnival game which will be able to offer quite the challenge for a couple of competitors to displace half a dozen plastic balls with integrated squirt cannons. Each of these cannons have a flexible tube that extends below the bottom of the float into a pool, delivering a constant water supply along the way as the float’s elbow rests will help steady one’s aim. There is a couple of cylinders that are built into the float’s alien-themed backboard, one with six yellow balls, while the other has six green balls.

Each player’s deft aim will be able to squirt water into a cylinder with maximum frequency, as the water displaces the balls; and the first player between the two to eject all half dozen balls from a cylinder will be declared to be the winner. It takes mere minutes to inflate with an air pump.