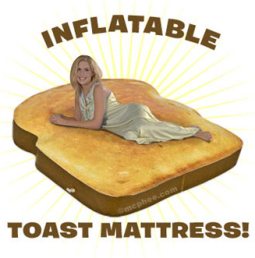 I’ve been on a hiatus from writing on Coolest Gadgets due to some offline, brick and mortar life issues. But I’m back in a big way, and there’s no other gadget that would do for my return than one of the more wackier gadgets I’ve seen in a very, very long time.

Using depths of imagination and innovation we haven’t seen since WWII, some insane but brilliant genius has envisioned a world where they asked “dammit, why can’t you sleep on toast?” Well, today, this insane but brilliant plan has reached fruition with the Inflatable Toast Mattress. I wish I could be funnier than the people who wrote the copy on the website selling the product, but I can’t. Here’s what they said:

Breakfast in bed? No, breakfast IS the bed! Sleeping on this giant 6′ by 7′ Inflatable Toast Mattress is likely to make you dream that you are a pad of butter and that you are floating down a river of freshly brewed coffee. In reality, you should not use the Inflatable Toast Mattress as a flotation device nor should you expose it to excessive heat. This piece of toast is made of plastic, not bread, so if you wake up and smell burning toast, you are probably just having a stroke.

I’m not sure what the target demographic is for this inflatable breakfast companion – because really, toast is second fiddle to the rest of breakfast. Rarely is toast (unless it’s French) the star of the breakfast. It’s usually “Eggs and Bacon, with Toast” or “Cereal, with Toast” or “Double Grand Slam Breakfast of Doom, with Toast”. And if you’re like me, you eat everything else and when there’s nothing left but toast, you half-heartedly grab one of those single-serving tubs of Smuckers Strawberry Jam, slather it on the toast, take one bite and announce you’re full and move on to sitting in your booth moaning, drinking coffee and talking politics until you can heft yourself out of there to go home and pass out on the couch. THAT’S what breakfast is all about!

Where was I? Oh yeah. Inflatable toast. You can buy one of these bad boys for $169.95 to sleep on and dream of breakfast (with toast, naturally).