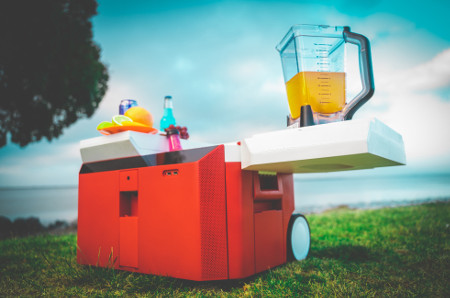 Going out for a picnic is an experience that everyone should enjoy at least once in their lives. After all, there are many different ways of bonding with family and friends, so why not do it among nature with the cool breeze blowing through your hair? What is a picnic without great food and equally tasty drinks? There is nothing quite like a cold, refreshing beverage to combat the summer heat, and this is where a cooler comes in handy whenever you would like to organize a picnic. Why settle for an ordinary, run-of-the-mill cooler when there is the Infinite Cooler?

The Infinite Cooler is deemed to be the only cooler that anyone will ever need, as this outdoor multi-function cooler is also more than capable of doubling up as a portable “party-in-a-box”. We are looking at a spacious 61 quart capacity of food and drink refrigeration, while featuring a Bluetooth speaker so that you can enjoy your favorite tunes wirelessly, in addition to it being a wireless charger that will juice up your compatible devices without getting into a tangled mess. Need to perk yourself up with some caffeine? Fret not, the Infinite Cooler also has an integrated blender/coffee grinder that has 550 watts of power, while the presence of LED lighting makes it equally suitable for use at night.

Not only that, the LED lamp is rotatable 360 degrees, providing light all way round, while other features include half a dozen cup holders, a USB insect repellent lamp, a built-in cutting board and utensils, and a bottle opener and corkscrew.

Whether it is an outdoor party or excursion, this convenient, swiss-army like device lets you pack everything you need in a single, compact place. With a recommended retail price of $599 apiece, those who would like to take advantage of its early backer price on Indiegogo can do so for a mere $229, which is definitely a bargain with the Infinite Cooler slated for an April 2019 release date.