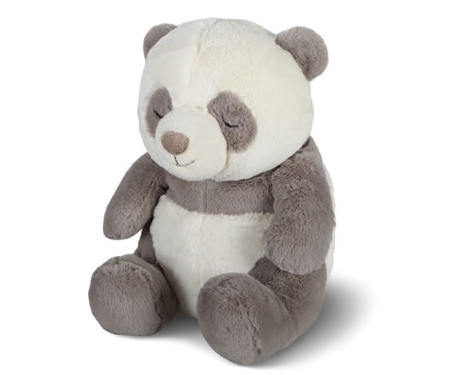 First time parents have plenty of skills to pick up — one of them would be to make sure that their little one gets to sleep. Of course, if your child fails to sleep, this would also mean that parents would not be able to get enough shuteye as well, resulting in them walking around in a zombie-like state the next day at work. Having said that, perhaps you might be interested in a tool that will let your little one enter dreamland at a moment’s notice? This is what the $34.95 Infant’s Sleep Sound Panda claims to deliver.

In fact, the Infant’s Sleep Sound Panda is the winner of a Creative Mind Magazine Preferred Choice Award for Creative Toys, where this particular plush panda generates eight different sounds to lull infants to sleep. It is even capable of re-creating the sound of a mother’s heartbeat heard within the womb, in addition to a gentle rain shower, the calming sounds of ocean surf, the harmonic sounds of whale song, Twinkle-Twinkle Little Star, Rock-a-Bye Baby, a classic lullaby, and a tranquil melody. Of course, the volume is fully controllable, while each sound can be set to turn off after 23 or 45 minutes. The panda itself will run on a couple of AA batteries as opposed to a diet of bamboo shoots. If you’re jealous of the little one’s new toy, you might want to get yourself the iMusic Pillow instead.