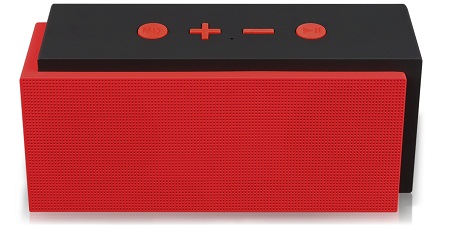 At this point I’ve reviewed enough speakers to know what Inateck might be tossing out there. Most of the time they’ve done their job fairly well, but there’s usually one or two points of contention to take into account. There have been finicky buttons, and their Bluetooth speakers haven’t been able to handle heavy bass, which a myriad of musical genres have. They’re trying to correct this with the Inateck Marsbox Wireless Speaker.

This is what a bicolor abstract geometric painting would look like in 3D. The body is mainly made up of a slanted black rectangle that sits about a quarter of an inch off the ground, as a red slanted rectangle juts out of the face, bottom, and side of it, both having a matte rubberized finish to them. The front is covered in a neatly arranged horde of dots for sound to escape from, and a singular hole is on the top for a microphone. Also on the top is a multifunction key, plus sign, minus sign, and play/pause button. On the back you’ll find a power button, teeny hole for resetting, DC-IN, and AUX ports.

Let me just take a moment to say how awesome the charging and audio jack cables look. The audio cable has the look and feel of a nice red braided guitar cable, and the charging cable is also braided, both having an air of professionalism about them. They obviously do their jobs well enough, but aesthetically, they’re pretty swell. It’s just nice to see something beyond a cheaply made plastic cable once in a while. 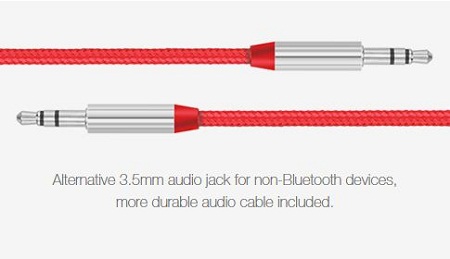 Of course, the biggest question in buying something new is how well it does its job. Since the biggest selling point on this speaker is how great its bass is, I obviously needed to put it to the test. After some quality time playing dubstep, orchestral pieces, EDM, and 8bit music much to the dismay of my neighbors, it really does hold to its claim. The last speaker I reviewed could get to be pretty loud, but it basically started destroying itself since it couldn’t handle the beats it put out.

This was easy to pair and easy to use. I can’t really understand why they added a radio feature, though it’s not unwelcome as we all like listening to the same 10 pop songs or NPR from time to time. The only unpleasant aspect of that feature was accidentally hitting the multifunction key to switch it from speaker to radio mode and having the horrifying screech of a non-channel blaring on occasion. It was nice to be able to answer calls by pressing the same button though.

The volume buttons having multiple purposes was a combination of nice and annoying, but mainly infuriating. Since they are giant plus and minus buttons, you generally only think of volume control, so you press it once when you want the volume to go up or down. However, on this device a short click means next or previous track, and the long presses are volume control. These are also what help you move between channels on radio mode, but that just means you’ll have the same issue in either mode. 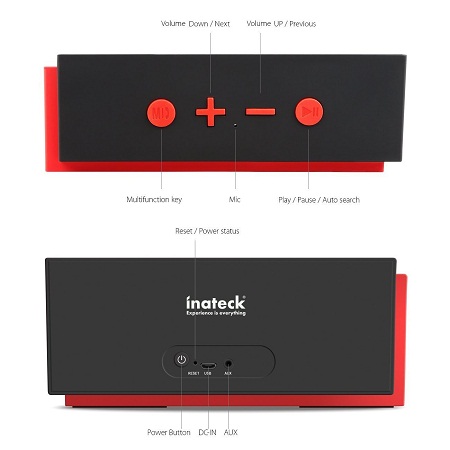 This speaker supports Bluetooth 4.0, and has a 33 foot range. It uses two 5-watt drivers and measures around 7.3 x 2.4 x 2.4”, weighing in at 2.2 pounds. This uses a 2200mAh battery, which should give you anywhere from 10-15 hours of jam time. It’ll work with anything that uses Bluetooth or can hook in through the audio cable. In the box you’ll get the Marsbox, a charging cable, audio cable, and manual.

Inateck is certainly getting better at its speaker game, but still has a bit of a ways to go. I still worry when it gets to be too loud, as I fear it will shake itself to death like the BTSP-10 Plus did. The quality has vastly improved, but the buttons are still a point of contention for me. It’s great for indoors, though you loose quite a bit of its boom outside. If you’re looking for a speaker with decent bass at your home or work office this will do the trick, and you don’t have to empty out your bank account to get one as it costs $49.99.

More information on Inateck
Available for purchase on Amazon