While the idea of having a full sound system at home is a great concept, you can really only enjoy the full effect in one room. The sound is not going to magically follow you through the house, and for those that are often on the go, you hardly get to enjoy it at all. If you want to have better quality audio than your smartphone or tablet is capable of, a Bluetooth speaker can be an awesome way to pump up your jams without taking up a lot of space in your bag. Of course, finding a good one for a variety of situations is hard to come by. We’ve looked at such a speaker from Inateck before, but now they’re trying to do one better with the BTSP-10 Plus.

This speaker looks pretty sharp with its matte black rubber finish and red accents for the button labels and speaker grill. The actual shape of the speaker is an octagon, though it features a hexagon pattern on the front, sides, top, and bottom. The designs on the top, bottom, and sides are cut in, while the front has 3D hexagons that are layered to appear as if they are coming closer and further back in space. The logo is featured in the bottom right corner on the front and on a sticker on the back with all the normal tech spec information. There are hexagon rubber feet on the bottom, and the right side bottom has the aux port, on/off switch, and charging port. It certainly has an overall honeycomb feel to it and looks “edgy” thanks to to color palate, however you’d prefer to interpret that.

This uses a 2100 mAh rechargeable battery, which should give users 9-15 hours of play time. When it drains down to nothing, you can recharge it through the included USB cable. It is two inches tall, a little over two inches wide, and 6.5 inches long. Weighing a little under a pound, this makes it the perfect travel companion, especially since it comes with a travel bag. It also comes with an audio cable in case you don’t want to rely on what may not be a strong wireless connection to pump out music through what the site specifically says is “double 3-watt precision-tuned drivers, multi-band compressors built with a high performance composite diaphragm 40 mm Rotunded 16-core NdFeB 3W magnetic driver”, but we’ll say two 3-watt speakers for short. 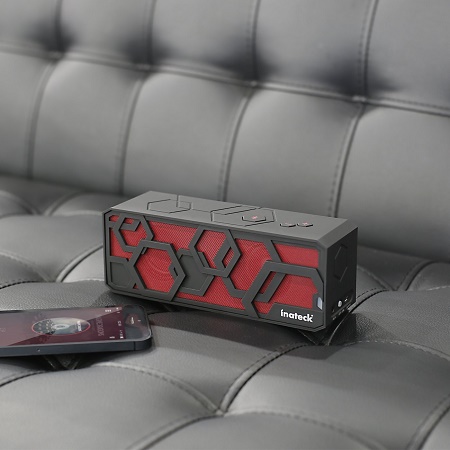 This speaker is pretty decent, depending on what your situation is. If you want a speaker that you can bring with you all through the house, the office, at a hotel, or a small gathering with friends, this does its job surprisingly well. However, if you’re trying to do a pool party, full-on party with more than 5 people, or listen to it out in a noisy public space, you might be disappointed.

At home, the quality was pretty spot on, and even when it was fairly loud it still played its part well. When I got to be too far away with my phone though, it would start to go a bit fuzzy or disconnect even though I was well within the 33 foot range. In a public space with lots of people there would be connectivity issues galore, and it just wasn’t loud enough to be heard. That being said, this isn’t really meant to be a full-on sound system for more than a few people. It does do well for a Bluetooth speaker, though if you try and put the volume up too much with bass-heavy songs, the speaker tries too hard and starts distorting itself. It has the ability to go super loud, but this tiny box wasn’t meant to hold that much boom.

In regards to the battery, Inateck seemed to be true to their word with having better battery life, as I have only charged this speaker a few times with a fair amount of frequent use. It has crossed many state borders with me in an assortment of backpacks, purses, and suitcases without so much as a scratch thanks to the travel bag and the rubber coating all over it. It really is perfect for people who live a fast-paced life but want music louder than their smartphone is capable of.

While I was a bit bummed about connection issues for busier areas and it not dealing too well with my phone being far away (one of which can be solved with the cable, but it’s an easy thing to forget), I really enjoyed this speaker. It’s loud enough to provide music for when I’m cooking, taking a shower, or hanging out with a few friends, and I had little to no issue with pairing my phone. The battery lasts for quite a long amount of time, and it looks super cool. It is a touch expensive at $45.99 considering it can’t handle the bass at full volume, but I wouldn’t persuade you away from it as few people who are looking for a Bluetooth speaker are going to be blasting their music that loud anyway. It does a great job, holds its charge, and looks as good as it can perform.