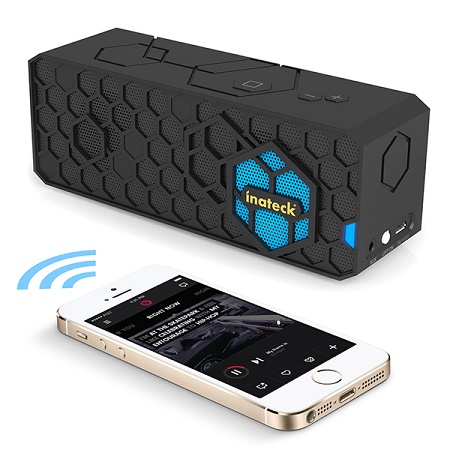 When it’s time to turn up the jams while you’re cleaning or taking a shower, you put up the volume on your phone as high as it can go. Of course, as soon as you turn on the water or start the vacuum, the noise of your current task will often drown out the music that is supposed to keep you motivated. It’s about this time that you realize you want a Bluetooth speaker to give your beats a little more oomph. The challenge of course is which one to pick as there are tens of thousands of options out there. I have recently had the pleasure of getting to pal around with the Inateck BTSP-10 Mini HiFi Speaker which seems like a solid option for a tune-booster.

It comes in a snazzy box with a microUSB cable, a flat 3.5mm AUX cable, and a carrying bag made of black felt. This matte rubberized not-quite-rectangle has a honeycomb theme with little accents of bright teal-blue and the logo on the front. It measures 165x60x45mm, and is far better than what a smartphone, tablet, or laptop is capable of lending to its 1.5” dual channel speakers (6W of power). Thanks to its size and rubberized exterior, I could easily bring this to a central area wherever I was working without having to clear off any space for it or worry about it sliding around. The only annoyance here is that the finish is a sponge for oil. If you have touched any sort of remotely greasy food or object recently, it will show up.

On the top of this speaker there are individual up and down volume buttons, and a play/pause button that can also function as a answer/end call button or call the last person you called. On the bottom right side of the speaker face, an LED is hidden in a partial honeycomb to tell you whether the speaker is connected, running out of battery or fully charged with a blue, red, or green light. On the right side is a on/off switch, the port for MicroUSB charging, and a AUX port to connect your devices rather than relying on Bluetooth. It can play music for up to 5-8 hours, or more if it’s directly connected to your device after 4 hours of charging. 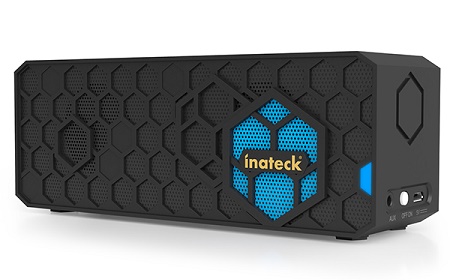 This speaker may be tiny, but it is mighty! While I couldn’t necessarily hear it while I was in the basement, it was within listening range if it was on the same floor. When I turned it up far past what I actually wanted it crackled once or twice, but it wasn’t constant even though it was turned up to an obnoxious level. It is said to have a Playback volume that can get up to 88db, and while I don’t contest that it did feel comparable to a three year old busting out Wagnerian opera. It’s possible, but you’re constantly afraid they’re going to explode from exerting themselves too much.

The button for making calls on the top of the speaker was awesome, as you only had to press it twice and it would call the last person you called. However, if you accidentally press it twice, you could end up with a phone conversation you weren’t expecting. It’s a neat idea, but I can’t help but think some more tweaking would help make this feature better. There was a bit of delay if I pressed a button on the speaker or was constantly opening and closing apps on my phone, but it was never more than 2 seconds.

This is well-built, snazzy-looking speaker that is perfect for boosting your music around the house or while you’re working on projects. The ability to use this for calls is great, but the callback function needs some tweaking to be more helpful, as it was too easy to accidentally call someone. The list price is $189.99 which is way too much for this speaker, though you can find it for $79.99, which is a fair price for what it can do.

Promo code for $10 off: O9WWNSXQ (Valid until December 31st)