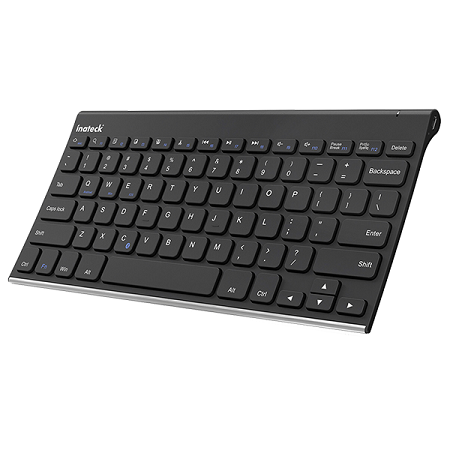 When you’re looking for a Bluetooth keyboard, you want something that is compatible with your devices, cheap, and isn’t a pain to use. Finding the perfect one is always a nightmare, because there are so many options to choose from. The range of quality is pretty staggering, but there are always a few good among the sea of them. We’ve seen some keyboards from Inateck before, and while the quality has been a jump between high and low, it looks like they’re starting to really get the hang of things with the BK1003E Bluetooth Keyboard.

This is a combination of matte black plastic and brushed stainless steel in a curved shape design that has a professional feel to it. It is rather slim, but has full-sized, decently spaced key caps. Bright white letters distinguish the keys, and light blue decals tells you that the keys have special functions. There are four low rubber feet that help stop the keyboard from sliding, and a tiny power switch hides next to the foot on top right side.

There’s an LED light on the side near the microUSB slot that will glow red when charging, and green when fully juiced up. There’s also an LED on the top right face of the keyboard that will let you know when the keyboard is on (only lights up for the first ten seconds), and will blink blue when you’re trying to connect to a Bluetooth device. Instead of having to hold down a power button as it was with the previous keyboards, this requires you to press FN+C to send out a signal.

This uses a rechargeable battery, hence the microUSB slot, and a power saving mode that will put the keyboard to sleep after 10 minutes of not using it. This means it can last for weeks on a single charge. If you want to wake it up again, press any key for 3 seconds and it will jolt back into action. 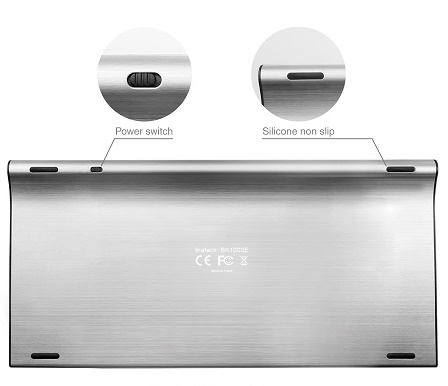 For a keyboard that only costs $27, it’s not too shabby. The keys are pleasant to type on, it’s slim with a comfortable weight to it, looks pretty nifty, and and there is no latency from the time I press the key to the reaction on my phone or computer. The keys are spaced well and are surprisingly tall, which made them easier for my fingers to find. The sound they create makes me think of a plastic key cap that wants to be as cool as a mechanical keyboard, but just can’t make it. They’re not silent as the description suggests as they do have a rather obvious spring back sound, though it is a tad muffled.

While the metal and stainless steel are really beautiful together, the plastic feels a little cheap in comparison to the metal. Both sides are prone to scratches, and the metal is going to get just as many smudgy fingerprints as your smartphone does. Is this a deal breaker? Not at all, but if we’re going to be nit-picky, the plastic could be a bit thicker.

What I found bothersome is that they made a point to put Android, Windows, and iOS on the key caps that are highlighted the same as the other function buttons, but they served no purpose. This connects to any Bluetooth device, so there’s no need to specify certain brands over the others. Aside from letting me know that they are compatible with devices from these companies, these buttons only served to be confusing, as it made it seem as though you could switch between devices. When I tried to pair two devices at once and switch to the device I initially had it paired to, it stopped working on either device, and I had to forget it on both devices for it to work on one of them again.

If you want a rechargeable Bluetooth keyboard that isn’t too costly and can travel with you while holding its charge for more than a day or two, this would be perfect. The keys are spaced well and high enough to make it almost feel like you’re on your desktop computer rather than running out and about for work. However, only pair it with one device at a time, and don’t expect the keys to be quiet.

Available for purchase on Amazon
More information on Inateck