Having a smartphone is good and well, but it’s hard to get much work done as you can’t see what you’re doing on such a tiny screen. The same is true even with a tablet, thanks to the keyboard taking up much of the screen space. If you like to be productive even when you’re away from your desk, then having a Bluetooth keyboard would aid your productivity ten fold. Of course, the real challenge is finding the right keyboard for you, as there are a myriad of options out there. We want something that works well, is cheap, and fits our aesthetics. 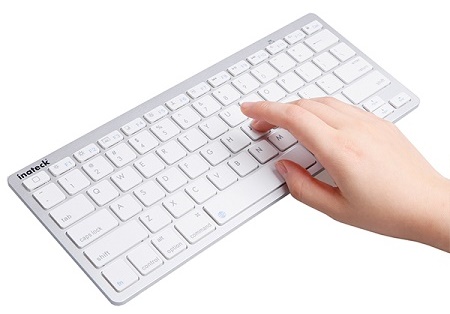 The BK1002E is obviously made for Apple products (equipped with a command key), and has the same look of a brushed aluminum enclosure with white keys. The entire enclosure isn’t made from aluminum, as the backing and battery case are a white plastic, but it is still quite sturdy. There are media keys along the top for volume, play/pause, back, and skip. There are also brightness controls, and basic word processing keys for things like copy, paste and select all. This would be quite helpful if I didn’t forget to use them all the time! There is a single light on the top right of the keyboard that will indicate if there is juice in your batteries, and that it’s rearing and ready to go. Thanks to the added height from the battery case and four white rubber feet on the back that keep it from sliding all over the place, this keyboard is at the perfect angle for typing on a flat surface. 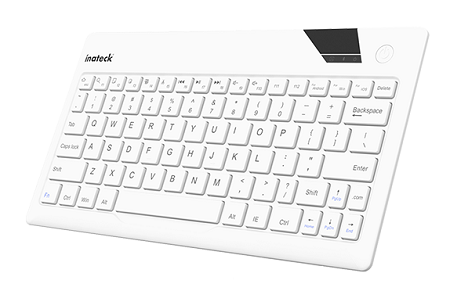 The BK1001E is a different ballgame entirely. It has an very low profile, and the top of the enclosure is a matte white, slightly grainy plastic with a small black glossy strip over the power, Bluetooth, and caps lock LED indicator lights. The entire keyboard feels very flimsy, and I feared putting it in my bag because it felt as though it could snap in half. The back has a thin, gray faux suede material covering it, and judging from this aspect alone, this keyboard is likely meant to be used on your lap, as it does well to prevent slippage against cloth much better than a desk. Sadly, it is a master at collecting the various fuzzies attached to my clothes or couch. That’s not really an honest gripe, but it does make me want to take a lint roller to it. There are media and basic word processing keys on this keyboard as well, though there are three keys labeled “For Android”, “For Windows”, and “For iOS” that seemed a bit on the pointless side. Personally, brightness controls would be preferred, as that’s what was chopped to make room for these.

To use the BK1002E, put in two AAA batteries, flip the switch on the back to “on”, and press “connect” (if your phone or tablet is having trouble finding it). The keys do have a slight plastic-sounding click to them, but it wasn’t severe enough that I considered it an issue. Once connected, it worked just as well as anyone could hope for. There was very little delay, and if I wasn’t typing for a minute or two, it would shut off to conserve power. Having to wait a literal second or two for it turn back on was only mildly annoying, but having to constantly replace batteries is far worse. Choose your battles wisely.

The BK1001E requires a little charging time via USB, and needs a 3-4 second press of the power button to come to life. Once it’s on, no lights will indicate that it’s up and running, unless you have caps lock on, so keep that in mind should you happen to walk away from it for a while. The keys are close to silent, and also have little to no delay.

The BK1002E is quite sturdy, and while having to use batteries is annoying, it offsets that thanks to the power saving mode. It is reasonably priced, and will make the time spent on your tablet or smartphone far more productive.
On the flip side, the BK1001E is far more slim, but has useless buttons, is a tad flimsy, and makes it difficult to tell whether it’s draining battery life or not. It costs more than its counterpart, which would be understandable if it didn’t have so many shortcomings.