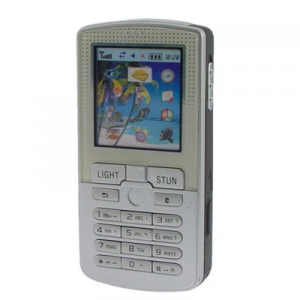 You know the feeling of leaving a store late at night, and walking out into a dark parking lot? While you don’t actually believe that anything is going to happen, you breathe just a little faster knowing that it could. I know I always like to hold my keys in between my fingers thinking I could hurt someone with them, but holding 5 million volt stun gun that looks like a cell phone, well, that could give me an almost unfair advantage over a would be attacker!

Imagine being able to catch a criminal totally off guard with the Cell Phone Stun Gun from Security Products in Disguise. With the look and feel of an actual cell phone, complete with a full color display, this stun gun is obviously very easy to carry and easy to use. With up to 5 million volts of electricity, this Stun Gun will effectively short-circuit the attacker’s nervous system, and allow you to get away. The stun gun is designed to work as long as you make contact with the attacker’s body–and sends more than enough charge to work through the persons clothing.
The Cell Phone Stun Gun operates with a rechargeable battery and is easy to charge up anywhere with a wall plug-in feature. The stun gun is additionally equipped with flashlight and of course it has a safety switch to prevent accidental firing. Hello Mom? ZZZZZZZZZ ouch!
Anyhow, you can carry the Cell Phone stun gun with the assurance that you’ll have protection if you need it, yet it certainly wont draw the attention of a regular stun gun and it will definitely be more protection than my keys ever were…  *Of course it’s not available everywhere, and in some places you’re not even allowed to carry it, but it would make me happy to be able to send my kid off to college with it…
Source: Immobilizer Cell Phone Stun Gun