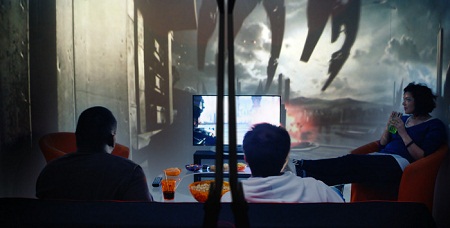 When you think of virtual reality, the Occulus Rift or other headset-type viewing experiences come to mind. While that may seem awesome to some, it’s an upset stomach waiting to happen for others. We mainly think of 360 degree cameras in a VR headset, but that cuts you off from your surroundings. While the point is to be totally immersed, having sensory deprivation from the outside world is not something we want all the time. This is especially the case if you like to have game nights with friends and want to include them in the experience.

If you wish you really could have an immersive experience that everyone could partake in, then you’re going to love the Immersis. This is a system that will allow you to project past your screen, much like the Illumiroom. However, this will give you more than a few flashes of light. You’ll have an entire half of any room engulfed in projected images, making everything in front of you into your screen. You will have to put in the dimensions of the room for the Immersis to understand how to project everything and it will calibrate 360 degrees of content into 180. The bigger the room you have it in, the more there will be to see.

The connection between your PC’s graphics card and the Immersis is a DVI/HDMI port. You can game, watch movies in a IMAX-like setting, or just project an image you find peaceful to add ambiance to your home. This is available for a discounted rate through a crowdfunding campaign for $1,150 or more, but be wary that it is still in its early stages, and the technology for this will likely be far better in the future.