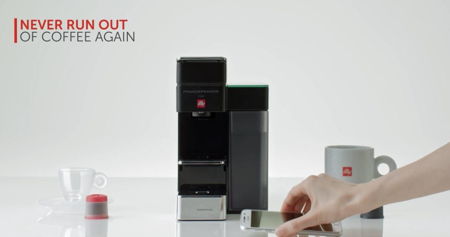 What does the world run on? Coffee would be my answer. After all, without humans, everything else would virtually be left on its own without any innovation or advancement. However, when we humans put our minds to do something, stuff happens. And many of us are unable to get our creative juices kicking at work unless we jolt our senses with some coffee early in the morning, or perhaps after lunch to stave off that sleepy feeling. illy knows this, which is why they decided to roll out a connected version of its Y5 single-serve espresso and coffee system earlier this month. Known as the illy Y5 DRS, it will integrate the Amazon Dash Replenishment System (DRS), hence the suffix.

This particular system will be very different from all of the other coffee machines and coffee presses that you have seen in the past. It is capable of tracking coffee capsule usage and automatically places a re-order for more prior to it running out of such coffee capsules.

It will work in tandem with a brand new companion “My illy Machine” app that is available on both Android and iOS platforms. This particular app allows the remote management of the Y5 DRS system over a mobile device, where it will operate multiple features. Via this intuitive app, coffee lovers are able to initiate brewing coffee and espresso, schedule daily brewing times, and even customize cup volume and temperature according to their liking. It will keep track of capsule usage, placing an order with Amazon when the capsule count begins to run low. Apart from that, this system can operates without the app.

The illy Y5 DRS coffee and espresso system will be Bluetooth enabled, and it arrives in only one color: black, with an asking price of $299 a pop. Any takers?