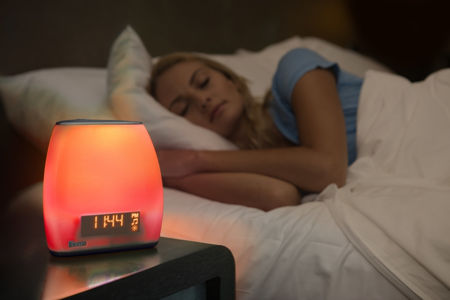 Getting enough rest is one thing — getting quality sleep is another. You might have the most expensive bed in the world, but it is of no use if that bed is unable to help you get some precious shuteye each night as you remain awake, thinking about a million different things in life. iHome knows this, and hopes to be able to help you doze off better while letting you experience a more restful sleep with its iZBT10 sleep therapy speaker that is part of the Zenergy range.

Sleep therapy arrives in many forms, including that of a pillow, and it is worth a shot if you have more or less given just about everything else in the market a try. iHome’s Zenergy products have received endorsement by Sleep Expert and Clinical Psychologist Dr. Michael Breus Ph.D, allowing the use of sound and light therapy to promote healthier sleep cycles.

The Sound Therapy feature will rely on specially recorded and engineered sounds in order to cancel out distracting noises. This will help to alleviate racing minds, which results in better sleep at night as well as a heightened sense of focus during the day. Light Therapy will work by assisting us to align our circadian rhythms. Also known as internal clocks, light therapy simulates the changing wavelengths of light throughout the day that would naturally govern it. Being exposed to these wavelengths of light at the right times can then trigger subtle biological responses, such as increased melatonin production as well as a more relaxed heart rate at night.

The iHome iZBT10 will arrive with customizable combinations of ten sound therapy presets as well as an equal number of specially designed 1000Lux, 360-degree light therapy and color-blending programs. Not only that, Bluetooth connectivity is also thrown into the mix, in addition to an FM radio, dual alarms to help you get up, sleep timers, and a USB charging port for mobile devices. The iZBT10 will retail for $99.99 a pop if you are interested.