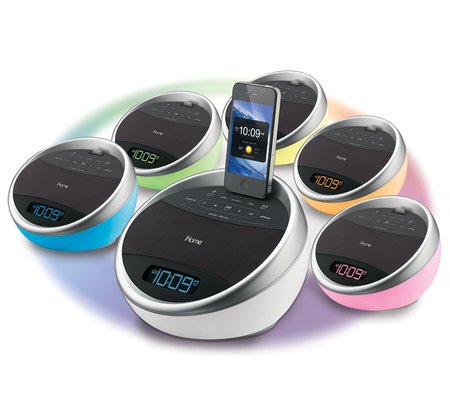 Let’s face it, most of us use an iPhone or iPod as an alarm clock. I suppose that iHome decided to take the impulse and run with it as they have recently released the iA17.
The iA17 has a chameleon-like color-changing ability, and the shifting of the colors of the rainbow can set the mood for sleep. It is possible to make the device pulse very quickly, or very slow at the touch of a button. It even has a “wake to color” feature which displays an array of soothing but energizing lights.
You can also program the device to wake to music on the iPod/iPhone or an FM radio. By the way, the sound on the iA17 is very cool, and it is comparable to the PURE Contour that I reviewed a few weeks ago.
In addition to all these features, the iA17 has some free apps associated with it. In fact, your iDevice will open up to the iTunes Store to the proper apps when you plug it in. You can set and control features on the device right from these apps, as well as set up the alarm and Internet radio.
The iHome iA17 iPhone/iPod dock is available right now on the official site for a price of $99.99.