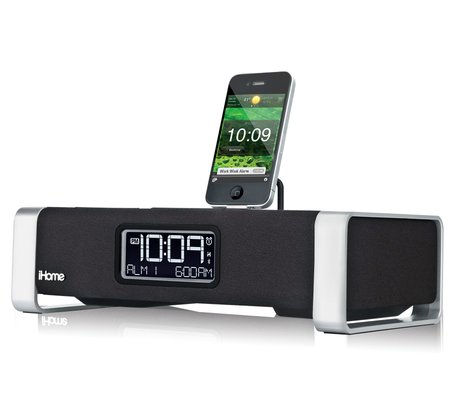 If your home does not yet have a dock of sorts for iDevices, then you’re in luck. After all, it would be great for you to always get the latest and greatest devices (within budget, of course), don’t you think so? iHome intends to fulfill that need of yours with their newest release, which would be the iHome iA100 Bluetooth Stereo System. This unique Bluetooth stereo system will play nice with the iPad, iPhone and iPod with the help of App Enhancement. Touted to be the first device from iHome that was specially designed to offer iPad support as well as taking advantage of its unique capabilities, the inclusion of Bluetooth connectivity for wireless communication is a nice touch as well. You will also find Bongiovi Acoustics’ DPS technology thrown into the mix for enhanced sound, and app-enhanced functionality for use with iHome+Sleep and iHome+Radio. In a nutshell, the iA100 is capable of delivering superior audio quality and more features than any other docking alarm clock on the market to users. Surely you are now asking yourself, just how much is this? We won’t spoil it in the first paragraph, so you will need to read on after the jump for a better idea.

The app-enhanced iA100 Bluetooth-enabled device will also come with a built-in FM radio alarm clock for iPad, iPhone and docking iPod models. Whenever you hook up your preferred iDevice via Bluetooth through a secure simple pairing, the iA100 is a different beast altogether. It will turn into a wireless entertainment multi-tasker with a variety of great features, where among them includes a stand-alone speakerphone with echo cancellation, transforming just about all compatble Bluetooth enabled phones into a robust speakerphone for the home or office. Not only that, it is capable of streaming audio of your favorite music and movies, while customized connections with iHome’s free iHome+Sleep and iHome+Radio apps are a nice tough to have.

The asking price for the iA100 Bluetooth Stereo System for iPad, iPhone and iPod with App Enhancement? We would say that it will not break the bank at all, considering the $199 price tag which is pretty reasonable considering all that it offers on paper.