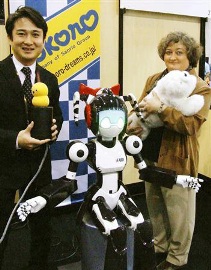 There were a lot of robots on parade at CES this year, and this one was the I-FAIRY from Kokoro Co.

According to my source, this robot can be “programmed with the user’s voice and accompanying body gestures that give the I-FAIRY a more natural feel when used for museum guide work”. I have an attached video after the jump that shows it doing nothing of the sort, but rather sitting in one place and occasionally moving to the beat of rock music.

I guess someone’s finally invented a robot that slacks off, eh? No, just kidding. The I-FAIRY was developed in conjunction with Japan’s National Institute of Advanced Industrial Science and Technology, and I have no doubt that it can do everything that it says as far as being a museum guide.

After all, do we really need to pay some human being to walk around a museum and show us things when a robot could do it far more interestingly? By the way, the I-FAIRY is also designed to do corporate presentations. Seriously? Now I have heard just about everything about robots today.

Actually, I just heard some interesting fact about robots today that is more related to the Adult Entertainment Expo that is held next door to CES every year. Apparently, someone has invented Roxxxy, a very pleasurable fembot. However, I’m not going to bother to report on that. Do your own research if you want to hear more about that.