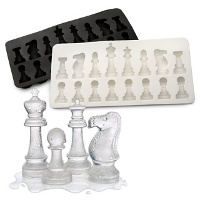 Sure you have heard of speed chess before, where you not only need your wits about you, but also an extremely high level of knowledge of the strategy game. Instead of not being constrained by the lack of time, speed chess requires you to be accurate and confident of your moves, all the while reserving your memory banks to figure out just what your opponent’s next 10 moves are. This time around, you don’t have a timer that adds to the stress of the game – rather, the pieces themselves will melt in time – unless of course, you’re playing right out in the open when the mercury drops below zero.
We’re talking about the £11.99 Ice Speed Chess Set here, where the entire idea is to win the game before the pieces melt. You can imagine what a potentially messy game this could end up, so hopefully someone can come up with a decent waterproof chess board that has drainage at the sides, where the board itself is not entirely level so that the melted pieces can have their water run off to a pail somewhere. Each purchase comes with two molds to get you started as soon as possible, but I guess they would do better bobbing around in some drink.