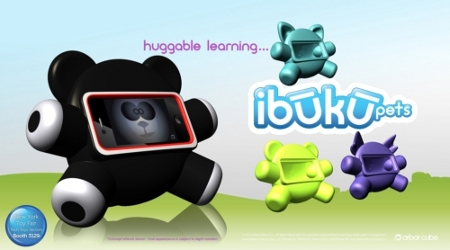 Toy company Arbor Cube knows that with many people making the jump to smartphones, our landfills will soon see more and more smartphones compared to featurephones, although the latter is still extremely popular among developing countries and emerging nations. That is why they have come up with a solution which might just change the way we teach our little ones about being environmentally friendly – that is through the introduction of iBuKu Pets.
iBuKu Pets are said to bring together elements of technologically inclined toys that deliver meaningful play, coupled with a huggable device protector as well as an environmentally-responsible message in order to encourage folks not to throw away their ‘old’ smartphones whenever a new model is introduced by a mobile carrier. After all, I am quite sure that the Galaxy Nexus S still works fine, and you are able to continue your life just as well without upgrading it to the Galaxy Nexus, but that does not seem to be what companies want you to head towards to, bombarding you with more and more advertisements of newer devices.

iBuKu Pets will boast a soft body which can expand to hold either a smartphone or an iPod touch. On the outside, the cushiony shell offers protection for its fragile electronics within, and will come in numerous characters that kids will fall in love at first glance. Not only that, there are also plenty of practical applications such as doubling up as a nightlight, alarm clock, wireless battery charger, still and video camera, music player and educational toy which is suitable for those aged from 3 to 12.
At first, only a couple of patent-pending models will make an appearance, where the base model features the doll only alongside an upgraded version that has an internal battery and wireless charging which can benefit smartphones – older or new ones. Future plans point towards the ability for iBuKu Pets to grow with their child. No idea on how much it will cost though, but anything to save the planet, no?
Press Release