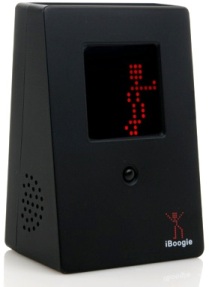 The iBoogie is one of those devices that you may not need, but you will probably want. Simply put, the iBoogie is designed to attach to your MP3 Player, and an LED stick figure gets its groove on to the music. By the way, it also works as a speaker, which would probably be the first reason that you would buy it.

Unless you are easily impressed by dancing stick figures like I am. The stick figure is “sound responsive”, so I’m guessing it is in tune with music. I’ve heard that it has over fifty signature dance moves. It can actually work without an MP3 Player, but it can only play one song: Canned Heat.

The iBoogie is powered by 3AA batteries, and it comes with some audio cable. It is compatible with most MP3 Players including the iPod. All you need to do is plug it into the headphone jack.

You should be able to get the iBoogie at the HSN site for a surprisingly low price of $19.95. For a lower price, you can purchase a blank notebook and draw stick figures on it. Then turn on your music and have a flip-book stick figure do the dancing. That might be tough to synchronize, though.